Beware the ideas of March? – extraordinary announcement of the Holy See: Pope Francis to consecrate Russia and Ukraine

When a bishop, not only his subjects, is subject to law.

Some years ago Pope Francis said to dissenters agitating to ordain women, that he is “a son of the Church”, and that he cannot change her doctrines to suit himself or others.
END_OF_DOCUMENT_TOKEN_TO_BE_REPLACED

It seems the Cardinal agrees.

After preparing the posts published on this blog earlier today (May 9) and on April 15 we discovered the interview of Gerhard Cardinal Müller which is linked here.

https://newdailycompass.com/en/no-bishop-has-the-right-to-prohibit-public-masses/ “No Bishop has the right to prohibit public [sic*] Masses” interview of Cardinal Gerhard L. Müller, former Prefect of the Congregation for the Doctrine of Faith

* All Masses or other parts of the sacred Liturgy of holy Church are public by their nature and definition.

Is it because praying the sacred Liturgy is an intrinsic good?

There are such things as intrinsic evils. Directly killing the innocent — like the pre-born, the elderly, the infirm; or suicide; also, blasphemy, sodomy, and the like.

Are there intrinsic goods? Is the sacred Liturgy one of them? END_OF_DOCUMENT_TOKEN_TO_BE_REPLACED

A burning question. Sanity wholely for the Masses.

Until we can complete a short treatise in questions & answers about the nearly universal cancellation of the sacred Liturgy (foremost holy Mass) by the world’s bishops during the panic over the coronavirus pandemic, Directors of the NCCL apostolate present the following points of argument for consideration.

Except in cases of excommunication, interdict or similar censure, does a bishop possess the authority to forbid – as many throughout the world of late have – lay faithful from actual participation (viz., to be really present) in a liturgical act of latria, regardless whether the Liturgy prayed is scheduled or not by the bishop, or whether it is declared sine populo, “without the people”, or “private”, “not public” or “publicly cancelled”?

Directors of the NCCL apostolate believe that they END_OF_DOCUMENT_TOKEN_TO_BE_REPLACED

Send them your virtual (if not exactly vital) support today!

Thanks to bishops worldwide, almost to the man (a term used here lightly), images of clergy praying alone what was once Liturgical — viz., public prayer of the Church — are now ‘live-streamed’ to the faithful on earth, who remain otherwise ‘virtually’ locked-out of the sacred places.

Indeed, in many instances, the bishops have accomplished what no earthly power hitherto END_OF_DOCUMENT_TOKEN_TO_BE_REPLACED

A project closer to home than usual – but about par for the course in duration. 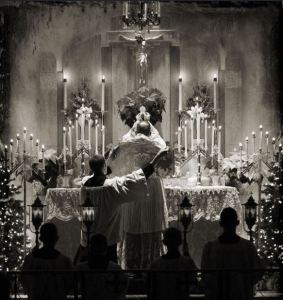 Many of NCCL’s projects are long-in-the-works, directed quietly, before fruit is born — or noticed. And most are conducted in far-off places across END_OF_DOCUMENT_TOKEN_TO_BE_REPLACED

“On the Formal Correction of Pope Francis”

The article (linked below) by John R. T. Lamont, DPhill, deftly treats of the process by which a pope may be corrected, and of true & false notions of obedience to ecclesial authority.

May the Holy Ghost ever-guide Mother Church — not least her higher (and lower) clerics — in these turbulent times!

Readers are of course free draw their own conclusions of the interview Carlo Cardinal Caffara gave to Matteo Matzuzzi as published in the Italian newspaper Il Foglio on January 14, 2017. END_OF_DOCUMENT_TOKEN_TO_BE_REPLACED

It’s what Romans do after they endure, by God’s grace. (See this post for that part of the story.)

Shortly after Bishop John Barres announced in early May, 2016, his decision to END_OF_DOCUMENT_TOKEN_TO_BE_REPLACED