A project closer to home than usual – but about par for the course in duration.

Many of NCCL’s projects are long-in-the-works, directed quietly, before fruit is born — or noticed. And most are conducted in far-off places across END_OF_DOCUMENT_TOKEN_TO_BE_REPLACED

It’s what Romans do after they endure, by God’s grace. (See this post for that part of the story.)

Shortly after Bishop John Barres announced in early May, 2016, his decision to END_OF_DOCUMENT_TOKEN_TO_BE_REPLACED

Read in this post “Part 2” — the happy conclusion — of a ten-year history & project of NCCL action to help restore parish life for a Roman community.

Shocking news calls for the charity of your prayers 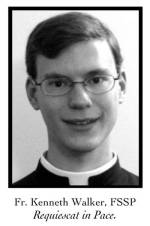 Authorities in Phoenix, Arizona and the Fraternity of St. Peter report that a Priest of the Fraternity died this morning in hospital and another was being treated of serious injuries after police were called to investigate a burglary at Mater Misericordiae parish, only blocks from the State Capitol. END_OF_DOCUMENT_TOKEN_TO_BE_REPLACED